The SKS is a self loading rifle of Soviet origin. It was developed during the later stages of World War 2 as a much lighter and more compact alternative to the Mosin-Nagant and SVT-40 rifles. Eventually it got replaced by the AK-47, which was designed at the same time. However, millions were produced and the SKS has been a very common weapon in all nations using Soviet small arms.

The SKS combines design features from the AVS-36 and SVT-40 self-loading rifles. The SKS has a conventional carbine layout. Externally it looks like a shortened SVT-40 rifle. The stock and furniture are made out of wood. It uses a short stroke gas piston and a tilting bolt. The SKS is fitted with a folding blade or spike bayonet.

The SKS is a semi-automatic rifle. It fires the intermediate power 7.62x39mm round from a fixed 10 round magazine. It is reloaded using 10 round stripper clips. The SKS is not able to launch rifle grenades, but the Yugoslav M59/66 is modified to fire NATO standard rifle grenades. The Chinese Type 63 is a modified version that is select-fire and uses detachable box magazines.

The first user of the SKS was the USSR. When it became apparent that in practice the AK-47 was a more potent weapon and could be produced at lower costs the SKS was no longer produced. The main user of the SKS and the Type 63 rifle was China. Many SKS rifles were exported or produced in states with ties to the USSR. Most SKS are obsolete or relegated to second line units. In many armies the AK-47 replaced the SKS.

The SKS is a self-loading rifle that fires the intermediate power 7.62x39mm round, which is also used in the AK-47. The original SKS has been produced in many nations with ties to the USSR. The copies are generally similar to the original SKS and may differ in minor specifications. 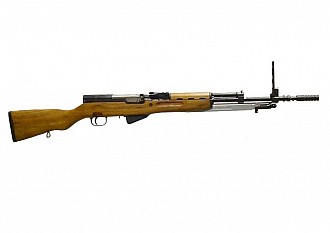 M59/66: The M59/66 is a highly modified M59, which is the Yugoslav production model of the SKS. The M59/66 has been adapted to fire NATO standard 22 mm rifle grenades. It is regarded as one of the more practical firearms for launching rifle grenades. In order to mount the grenades the barrel is extended and a special muzzle is fitted. Just in front of the front sight a ladder sight is installed.

Type 63: The Type 63 is a modified version of the Type 56, the Chinese production model of the SKS. The Type 63 is a select-fire weapon and is fed from magazines instead of stripper clips. It is normally issued with proprietary 20 round magazines but also accepts 30 round Kalashnikov magazines.

The SKS fires the intermediate power 7.62x39mm Soviet cartridge, which is also used in the AK-47.

The SKS was developed for use alongside the AK-47, but in practice the AK-47 proved to be a more effective combat firearm, rendering the SKS obsolete.