The M1919 is a machine gun of US origin. It was developed after World War 1 by John Browning for the US forces. The M1919 and its derivatives were the standard medium machine gun during World War 2 for the US forces and was produced in very large quantities. Nowadays most M1919 are replaced or relegated to reserve use, although small numbers remain in service.

The M1919 is an air-cooled development of the Browning M1917 water cooled machine gun. It uses that same short recoil mechanism but replaces the water cooled barrel with an air cooled barrel covered in a shroud. The M1919 fires the .30-06 round from cloth or linked belts that are inserted on the left of the weapon. A pistol grip and trigger are located on the rear of the receiver and a swivel point at the front of the receiver is used to mount the weapon ona tripod.

The M1919 fires the .30-06 rounds from belts of various lengths. Foreign models were also produced in 7.92mm Mauser, .303 British, 6.5mm Swedish and 7.5mm French. The cyclic rate of fire is rather low at 400 to 550 rpm. When used on a tripod the maximum effective range is 1 km. The M1919 proved it was a reliable weapon during its use in World War 2 and many Asian and African conflicts.

The M1919 was widely used throughout World War 2 and the Korean War. Many nations with ties to the USA acquired the M1919 and used it in many other conflicts. In US service the it was replaced by the M60 for infantry use and by M73 for vehicle use. In most other nations it was replaced by the MAG general purpose machine gun. Nowadays the M1919 is mostly in reserve use or phased out, but a few nations and irregular forces still use the M1919. 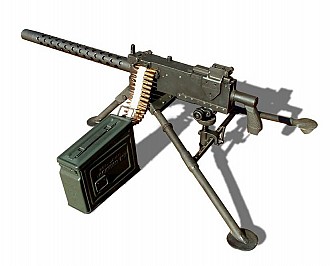 The M1919 was first developed for infantry use and was later adapted to various other use. The M1919 was to be used on a tripod and was operated by a two or three man team.
M1919: First production model with heavy barrel to mimic characteristics of water cooled M1917.
M1919A1: M1919 with a light barrel that did not make the weapon that easier to carry but impaired the sustained fire ability significantly.
M1919A2: M1919 with a medium thickness barrel that was used between World War 1 and 2. The M1919A3 is similar with detailed differences.
M1919A4: Mass produced improved version of the M1919A2. The A4 model is the most common M1919 variant. 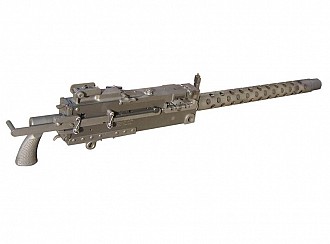 Besides infantry use the M1919 has also been widely employed on vehicles. The M1919 could serve as a pintle mounted weapon or as a bow or coaxial machine gun. The vehicle mounted models are very similar to the M1919A4.
M1919A5: Dedicated vehicle model of the M1919A4 with extended charging handle.
M1919A4E1: An original M1919A4 converted with extended charging handle similar to M1919A5.
M37: Coaxial machine gun model similar to M1919A5 but with ability to feed from both sides. Introduced in 1953.
AN/M2: M1919A4 for aircraft use with thinner barrel and receiver and higher rate of fire. There also is a AN/M2 in 12.7mm that was derived from the M2HB. 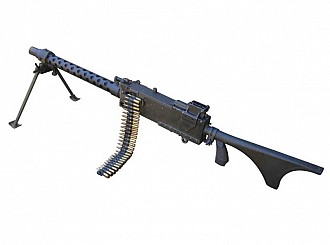 The M1919A6 is an infantry model with a bipod and shoulder stock. Therefore there is no need to carry a tripod. In order to keep it man portable it has a lighter barrel to compensate for the added weight of the wooden stock. The M1919A6 was used extensively at the end of World War 2 and the Korean War.

The South African MG4 is an improved M1919. Changes include the use of disintegrating belts, reliability upgrades, open bolt system, a safety system and a quick change barrel. It was available in .303 and .30-06 but the 7.62x51mm version is the one that was mass produced. The MG4 was not produced in an infantry versions. It is only available on flexible mounts as the MG4 AA and as a coaxial weapon on vehicles as the MG4 CA.