The MAG is a machine gun of Belgian origin. It was developed by Fabrique Nationale in the 1950's. The MAG became the most widely used machine gun ever developed and remains in active use today. The name MAG originally stood for Mitrailleuse Au Gas but the meaning was soon changed to Mitrailleuse d'Appui General, which is French for general purpose machine gun. For this reason the MAG is also known as the GPMG, especially in Commonwealth use.

The MAG is a gas operated weapon that uses a long stroke gas piston. It is a belt fed weapon that feeds from left to right with the cases ejected downwards. It has a quick change barrel with the carrying handle being used when replacing the barrel. A wide variety of models was developed ranging from infantry use to aviation applications and coaxial models. Early models used a wooden stock with later models using plastics. The very latest models are fitted with Picatinny rails for mounting various optics. While the MAG has been produced in so many nations various sub models with minor differences exist.

The MAG fires the 7.62x51mm NATO round from belts of various types and length. The MAG fires fully automatic only and the 3 position gas selector allows for a rate of fire between 650 and 1.000 rounds per minute. The quick change barrel allows for continuous burst fire. The effective range is 600 meters from a bipod and 1 km when using a tripod. The slant range is even further.

The first adopters of the MAG were several European nations. Eventually the MAG became very common in Europe, Asia, the Middle East, Africa and all of America. Major users include the USA and the UK, resuling in widespread Commonwealth use. In most modern armies the use of the MAG as an infantry weapon has deminished with the introduction of smaller caliber light machine guns. The MAG remains a very common weapon that is often pintle mounted on a multitude of vehicles and heclicopters. 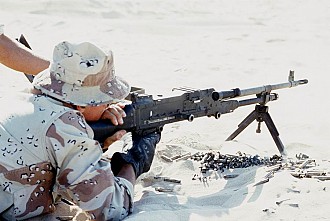 The MAG Infanterie is the standard infantry version of the MAG. It is also known as the MAG 60.20 or MAG 58. The Belgian manufacturer Fabrique Nationale alone produced over 20 versions of the MAG that mainly differ in various details. Early versions of the MAG had a wooden buttstock, later versions use a plastic buttstock, with the latest versions having Picatinny rails for mounting optics. The UK production versions are the L7A1 and L7A2, with the latter having an improved feed system and ability to mount a belt box. The very uncommon MAG 10.10 is a jungle model that features a shorter barrel and buttstock.

In the United States the MAG is produced as the M240B and M240G, with the M240B having a heat shield around the barrel and the M240G looking similar to the standard late production MAG. The M240E6 is an effort to reduce the weight of the MAG withouth reducing its effectiveness. The M240E6 uses a titanium alloy receiver and a shorter barrel.

The MAG Aviation is a model of the MAG for aircraft use and is also known as the MAG 60.30. The Aviation models are used in aircraft and gun pods. The Aviation models lack buttstock, carrying handle, bipod and pistol grip. It only comes as a solenoid fired weapon. Sometimes flexible mount MAG models with spade grips are also called Aviation models, but are variants of the MAG Infanterie. Spade grip models include the US M240D for mounting on vehicles and M240H for helicopter mounts.

The MAG Coaxial is a variant for coaxial use. It is also known as the MAG 60.40 or MAG Coaxe. The coaxial models lack buttstock, carrying handle and bipod. It can be either trigger or solenoid fired. In the UK the coaxial models are known as the L8A1 and L8A2 with improved feed mechanism. The L37A1 and L37A2 are variants of the L8A1 and L8A2 for flexible use. They feature a normal trigger assembly and there is a kit for dismounted use. The US production models are known as the M240 and M240C, with left and right hand feed respectively.