The SS-77 is a machine gun of South African origin. It was developed by Vektor to replace the MAG in South African service. After a prolonged development period starting in 1977 the SS-77 was selected in the early 1990's. Due to reliability issues in the early models the weapon was modified resulting full production to start as late as the early 1990's. The weapon is named after its designers Smith and Soregi and the year in which development started.

The SS-77 is a gas operated machine gun without gas regulator. The SS-77 is belt fed and feeds from left to right. Besides the polymer folding stock, pistol grip and handguard the weapon is all made out of metal. The barrel is fully exposed and features a quick change mechanism. A conversion kit exists to turn the SS-77 into the Mini-SS that fires a the smaller caliber 5.56mm round.

The SS-77 is a belt-fed machine gun that fires the 7.62x51mm NATO round. The smaller Mini-SS fires the 5.56x45mm round. The cyclic rate of fire is about 800 rpm. The quick change barrel allows for continuous fire. Since the removal of the the teething problems the SS-77 is reported to be one of the most reliable machine guns available.

The SS-77 and Mini-SS are widely used by the South African military. Export sales have been made to various nations and are expected to continue. 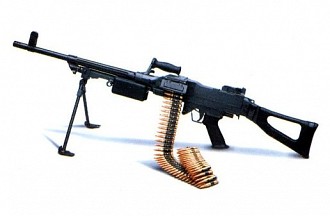 The SS-77 is the original model that fires the 7.62x51mm NATO round. The original model did not meet the strict reliability target set by the South African military and after subsequent upgrades the SS-77 has a superb reliability record. Due to the changes the rate of fire has been reduced from well over 1.000 rpm to 600 to 800 rpm. The most recent development is the SS-77 Compact that features a telescopic stock, accessory rails and a grippod instead of the bipod. 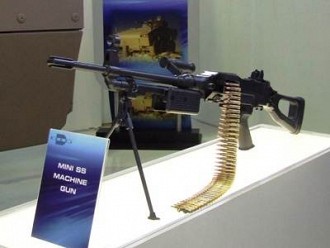 The Mini-SS is a light machine gun version of the SS-77 that is available since 1994. The Mini-SS fires the 5.56x45mm round from a shorter and lighter barrel, making the weapon easier to operated by a single soldier. It can be converted from an existing SS-77 using a conversion kit or bought as is. It is possible that a compact model of the Mini-SS exists as well.

The SS-77 was developed to supplement the Belgian MAG in the infantry role.