The M134 is a minigun of US origin. It was developed by General Electric in 1960 as armament for helicopters and to be used in aircraft gun pods. The name M134 is the US Army designation, the marketing name Minigun has become popular and is even used to refer to rotary barrel weapons in general. The M134 has been trailed as a tripod mounted weapon for infantry use, but contrary to popular belief it cannot be used as a man portable weapon.

The M134 is based on the Gatling principle and uses a six barrel rotary assembly. Ammunition is fed linkless or by belts that travel through a delinking device. The gun is externally powered and has a short spin up time. When operated manually the gun is mounted on a single arm that allows the weapon to swivel horizontally and vertically. The gun is fired using spade grips with a sight unit and tracer ammunition as means of targetting.

The M134 was widely used as helicopter and aircraft armament during the Vietnam war. Over time the M134 has been widely exported and is now also used on vehicles, small boats and naval vessels.

The M134 is the original model Minigun that is produced since the early 1960's. It has been produced in a variety of versions that mainly differ in the mounting in which it is used. Manually fired units feature grips with a trigger and brackets for mechanical or optical sights. Remote fired models with solenoid trigger are found in gun pods and helicopter fuselage mountings. Regarding the weapon itself three versions can be identified: the original model, an improved reliability model and a final model firing at 2.000 and 4.000 rpm instead of 2.000 and 6.000 rpm. These are known simply as the M134 in US Army service but have the designations GAU-2/A, GAU-2A/A and GAU-2B/A in US Air Force service. The GAU-17 is a late production model similar to the GAU-2B/A with new Picatinny sight brackets and other minor changes. The GAUSE-17 is similar to the GAU-17 but is optimized for mounting on naval vessels. 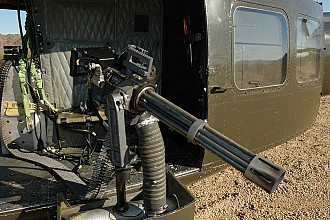 The M134D is the latest model of the M134 that is produced by Dillon Aerospace. The M134D functions in a similar way as the original M134 but uses many parts that are altered for increased strength and reliability. Another change for improved reliability is the removal of the fire rate selector. The M134D has no selectable rate of fire and always fires at 3.000 rpm.