The B-10 is a recoilless rifle of Soviet origin. It was developed in the early 1950's to replace the earlier SPG-82 rocket launcher in Soviet service. The B-10 was produced in large numbers for use with Soviet forces and their allies. Although it was soon inadequate against Western armor the B-10 remained in use with many third world nations as a cheap an effective infantry support weapon.

The B-10 is a recoilless rifle of a rather conventional design. It is a smoothbore weapon that is loaded from the rear, through a breech that swivels sideways. A basic optical sight is fitted on the left side of the weapon. The B-10 is fired from a collapsible tripod. An axle with two wheels is attached to the base of the tripod when in transit. Two grips near the muzzle are used to pull the weapon. At least two people are required to operate the weapon effectively.

The B-10 can easily be pulled by hand over short distances. Over long distances it is to be moved by vehicle. Soviet forces often employed the B-10 from the BTR-50 armored personnel carrier. In many third world countries the B-10 has been fitted on a variety of jeeps and pickup trucks.

The B-10 was widely employed with the Soviet forces since the mid 1950's until it was fully replaced in the 1970's. The B-10 was widely exported and used during most conflicts in the Middle East, Africa and Asia. China was also one of the main producers and users of this weapon. Nowadays the B-10 is considered obsolete but remains operational in limited numbers today, mostly with third world nations. 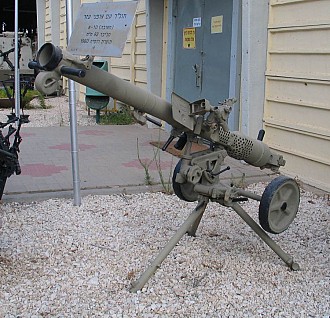 The B-10 is a conventional recoilless rifle that despite its average performance was produced in very large numbers. The B-10 is the original and most common version, of which the Soviets did not develop any variants. It was produced under license in China as the Type 65, which was a direct copy. The Type 65-1 can be seperated into two part in order to be carried over long distances.

The B-10 fires ammunition that looks very similar to mortar rounds. Compared to the Soviet 82mm mortar rounds the ammunition for the B-10 is more round at the front and has a longer tail. As with mortar rounds the propellant is wrapped around the tail. Various types of ammunition have been developed, all of which are interchangeable among the original B-10 and later models.
BK-881: Original Soviet HEAT round.
BK-881M: Improved Soviet HEAT round.
O-881: Original Soviet HE-Frag round.
Type 65 (HEAT): Chinese HEAT round, normally used by Type 65.
Type 65 (HE): Chinese HE-Frag round, normally used by Type 65.
Type 82: Improved Chinese HEAT round with rocket propulsion, developed for Type 78.
Type 78: Chinese anti-personnel round filled with steel balls, developed for Type 78.