The Dragon is an anti-tank missile of US origin. It was developed by McDonnell Douglas in the late 1960's as a man portable short range guided anti-tank weapon. The Dragon remains in production, even though it is considered obsolete by todays standards.

The first and main user of the Dragon has been us the US army and marine corps. Additionally it was exported to various nations, mostly in Europe. Several nations replaced the Dragon by newer designs such as Spike and Javelin. Unlicenced copies are produced in Iran. 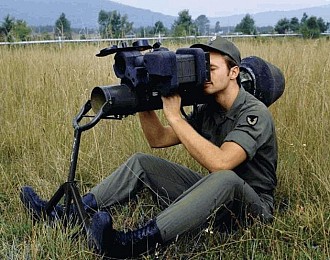 The Dragon is a short range wire guided anti-tank weapon. The improved Dragon II is fitted with a much improved warhead. The latest model is the Superdragon, which was known as the Dragon II+ at first. The Superdragon has twice the range as the earlier versions and features a standoff probe with small charge to defeat ERA. In Iran a reverse engineered Dragon is produced under the names Saeghe 1 and 2. The Saeghe 1 looks similar to the Dragon and Saeghe 2 like the Superdragon.

The Dragon launch canisters are loaded with a missile with the same name. The Dragon is also known as the M222 with the US Army and the Mk 1 MOD 0 with the US marine corps. The M223 is the inert training round. The Dragon II warhead has been refitted to USMC Dragons. The Superdragon was never adopted by the US military and therefore has no US military designation.