The Saladin is a reconnaissance vehicle of UK origin. It was developed shortly after World War 2 to replace the wheeled reconnaissance vehicles of that era. The Saladin is named after the famous warrior. The Saladin shares many automotive components with the Saracen and several other FV600 series vehicles. The design work on the Saladin starter earlier but due to a higher demand for an armored personnel carrier the Saracen was the first FV600 to enter service.

The Saladin is based on a 6x6 chassis with large wheels. The driver is seated at the front in the middle and enters through a hatch that also doubles as a window. The welded turret is located in the middle and seats the gunner and the commander, who also doubles as the loader. The turret mounts a 76mm cannon that is rather powerfull for a vehicle of this size and weight. The engine is located at the rear and is easily accessed by large hatches.

The main armament on the Saladin is the 76mm L5A1 cannon for which 42 rounds are carried. The 76mm cannon was very powerful at the time of development and allowed the Saladin to effectively engage any armored vehicle but tanks. The firepower is offset by rudimentary fire controls and the cannon is not stabilized. A .30 M1919 machine gun is mounted as a coaxial weapon and a second one is mounted on the turret roof.

The Saladin features better protection than the other vehicles based on the same chassis. The steel armor protects the crew from small arms fire, 12.7mm rounds and shell splinters. Over the frontal arc it may also withstand 14.5mm rounds fired from a distance. The Saladin does not feature a NBC system or a fire extinguishing system. Two banks of six smoke grenade launchers are fitted.

The wheeled chassis with large wheels gives the Saladin good mobility on roads and dirt roads. The off road performance is average due to the high ground pressure and lack of tire inflation system. The Saladin is not amphibious but may use a fording kit to traverse shallow water. A 170 hp petrol engine provides propulsion.

The main user of the Saladin was the United Kingom. It was also exported to many nations, mostly in the Commonwealth. In UK service the Saladin was replaced with the Scorpion light tank that features a similar 76mm cannon. The majority of Saladin armored cars are no longer in service although a few hundred are in second line service or held in reserve by various nations. 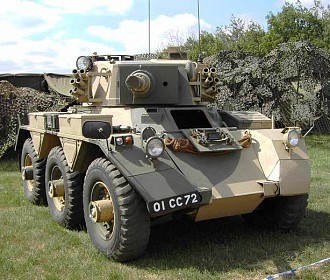 The Saladin is an armored car based on a distinctive six wheel chassis and features a rather thick and short 76mm cannon. An improved variant called the Mk II featured minor improvements and was the main production variant. Variants of the Saladin have never been developed although the most components in the chassis are used in other FV600 6x6 vehicles. Some Saladin in foreign service have been repowered with a diesel engine to extend their service life.

The Saracen armored personnel carrier uses the same chassis as the Saladin.