The T-72 is a main battle tank of Soviet origin. It was developed in the early 1970's to replace the earlier T-55 and T-62 as the main battle tank in Soviet service. The T-72 is a further development of the T-62 that uses many of the technology designed for the contemporary T-64 alongside which it was to serve. The introduction of the T-72 provided the USSR with such a boost in capabilities that it spurred the development of newer NATO tanks such as the M1 Abrams, Leopard 2 and Challenger 1. The Russian T-90 tank currently in production is a further development of the T-72.

The T-72 is a medium sized tank with a layout similar to other modern Soviet tanks. The driver is seated in the middle of the hull, just in front of the turret. The turret houses the commander and gunner and since the 125mm cannon is connected to an autoloader no additional crew is needed to load the gun. The diesel engine and drivetrain are located in the rear. A large number of variants was produced which subsequently improved the performance of the design. For export less capable and cheaper versions were produced.

The T-72 is armed with the powerful 125mm D-81TM smoothbore cannon that is connected to an automatic loader. The 125mm cannon provides a massive increase in firepower and is effective against all contemporary tanks. The effective range is about 2 km against tanks and 4 km with high explosive shells. The autoloader allows a rate of fire of about 7 rpm and proved to have a mediocre reliability. A 7.62mm PKT machine gun is mounted as a coaxial weapon. Self-protection is provided by a 12.7mm NSVT heavy machine gun on the turret roof.

The T-72 has a much higher level of protection than the previous T-55 and T-62. The latest 105mm APFSDS rounds have the ability to pierce the armor of the T-72B, but 120mm cannon are considered the only effective means of engaging the T-72. When fitted with ERA the protection level against anti-tank rockets and guided missiles is increased significantly. This advantage has been negated with the introduction of dual charge warheads. When the armor is pierced setting of the T-72's own ammunition is likely and has dramatic results. An NBC system and smoke grenade dischargers are common on most T-72's.

The T-72 has better mobility than the previous T-55 and T-62 series, both on and off road. A 780 hp diesel engine provides propulsion, allowing for speeds up to 60 km/h. Ride comfort and power to weight ratio are limited compared to other contemporary tanks. With a snorkel water barriers of up to 5 m can be traversed.

The main user of the T-72 was the USSR. Unlike the T-64 and T-80 the T-72 was exported in large quantities, although most export versions have reduced capabilities. Even though the production has switched to the T-90 the T-72 remains one of the most common tanks in the world. Besides Russia they are commonly foun in Eastern Europe, the Middle East, Asia and Africa. 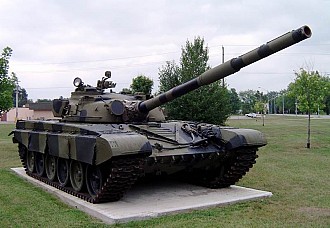 The original T-72 was introduced in 1973 and was nicknamed Ural. The early T-72's are the most basic models and can be identified by having the infrared searchlight position on the left side of the gun. In 1976 it was upgraded with a new main gun and improved turret armor. Many original T-72 were retrofitted with a more power engine, smoke grenade launchers and rubber skirts instead of the early metal ones.

T-72: The original T-72 model as described above. The same designation includes an export model with reduced capabilities.
T-72K: Command version of the T-72 with additional radious and less main gun ammunition.
T-72V: Unofficial designation for T-72 models that have been fitted with Kontakt-1 ERA. 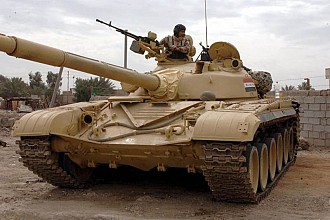 The T-72A is an improved version of the original T-72 with a much higher protection level due to the use of composite armor and rubber track skirts. The fire control systems has been improved, a laser range finder is added and smoke grenade launchers are mounted on the turret. Subsequent improvements include additional armor on the glacis plate since 1979 and a radiation liner since 1984.

T-72A: Original T-72A model as described above. T-72AK is the command model with additional radios and less ammunition.
T-72AV: T-72A fitted with Kontakt-1 ERA on the turret, glacis plate and skirts.
T-72M: Export model of the T-72A with a reduced armor package and less capable fire control systems.
T-72M1: T-72M with increased armor on the glacis plate and fitted with smoke grenade launchers on the turret. The T-72M1K is a command version with additional radios and less ammunition and the T-72M1V adds Kontakt-1 ERA. 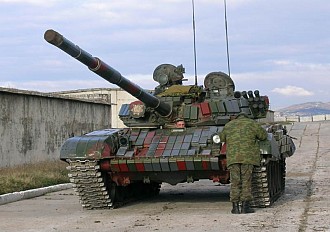 The T-72B model is a much improved T-72A. The armor package has been substantially improved and includes appliqué armor on the glacis plate. Due to the new fire control system, improved stabilization and new 2A46M cannon it is possible to launch the 9M119 Svir (AT-11 Sniper) guided missile from the gun barrel. The more powerful 840 hp V-84-1 engine provides propulsion.

T-72B: Baseline T-72B model. The command version with additional radios and less ammunition is known as the T-72BK.
T-72B1: Simpler variant of T-72B with fire control and optics from the T-72A and thus removing the ability to launch the 9M119 missile. Some are fitted with Kontakt-1 ERA.
T-72BV: T-72B fitted with Kontakt-1 ERA on the turret, glacis plate and skirts.
T-72BM: Improved T-72B introduced in 1989 with Kontakt-5 ERA and improved composite armor. In 1990 a new fire control system was added.
T-72S: Export version of T-72B with less ERA blocks, simpler NBC system and no radiation liner. 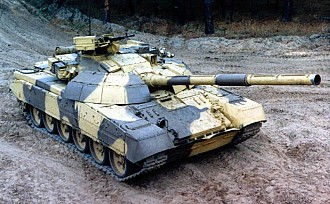 The 1991 Gulf War showed that the basic versions of the T-72 were no match for modern main battle tanks. A series of upgrade packages has been developed by various companies.

In Soviet service the T-72 replaced the T-62 and many older tanks.

The T-80 was developed as more capable alternative to the T-72 in Soviet service.

The 12.7mm NSVT heavy machine gun is mounted on the turret roof.

The 7.62mm PKT machine gun is mounted as a coaxial weapon alongside the 125mm cannon.