The T-80 is a main battle tank of Soviet origin. It was early 1970's as a more capable alternative to the T-72 that was to up the bulk of the tank force. The T-80 is a further development of the T-64 but has been improved in all key areas. For instance the T-80 is the first tank in active service to use a gas turbine engine. Compared to earlier Soviet tanks the T-80 was a much better match for NATO tanks and remains a potent weapon today.

The T-80 has a layout which is similar to other modern Soviet tanks. Compared to contemporary NATO tanks the T-80 is smaller and has a limited silhouette. The driver is seated in the middle of the hull, just in front of the turret. The turret houses the commander and gunner and since the 125mm cannon is connected to an autoloader no additional crew is needed to load the gun. The gas turbine engine and drivetrain are located in the rear. Fuel drums can be carried at the rear for additional range.

The main armament is the 125mm 2A46 smoothbore cannon which is connected to an automatic loader with 28 rounds ready to fire. The rate of fire is 7 to 9 rounds per minute. The fire controls and stabilization are of much better quality than used in the T-72 and some T-80's feature a fuzing system for HE rounds. In the early models the cannon has the ability to launch the 9M112 Kobra (AT-8 Songster) missile and in later models the improved 9M119 Svir (AT-11 Sniper) is used. A 7.62mm PKT machine gun is mounted as a coaxial weapon and a 12.7mm NSVT heavy machine gun is mounted at the commander's cupola on the roof and may be fired from under armor protection.

The original T-80B has a high level of passive protection with its passive ceramic armor. The T-80BV has a much improved level of protection due to the first generation Kontakt ERA over the frontal arc. The T-80U introduced a new shape turret with improved protection and the latest Kontakt-5 ERA. Additionally all variants are fitted with a NBC system and smoke grenade launchers. Some late production models are fitted with the Shtora-1 active defense system.

The T-80 has a good cross country mobility with its tracked chassis and powerful engine. The gas turbine engine requires more maintainance and is somewhat more prone to breakdowns compared to diesel engines, although the power and reliabilty steadily increased in later models. Both in terms of power and controlability the T-80 performs better than the earlier T-72. The maximum road speed is 70 km/h and the range on roads is 335 km due to its high fuel consumption. Using a snorkel it may ford in water up to depths of 5 meters.

The main user of the T-80 was the USSR and most T-80's were passed on to Russia and others ended up in several CIS nations. Unlike most Soviet tanks the T-80 was hardly exported and only Cyprus and South Korea received the T-80. Most T-80's remain in use and even with the introduction of the T-90 the T-80 remains the backbone of the current Russian tank fleet. 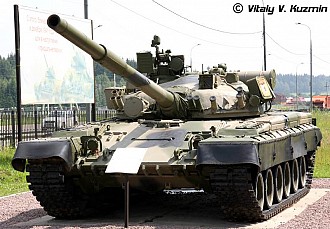 The original T-80's can be considered T-64's with a new chassis since the armement and systems are almost completely transfered from the T-64A. These early models can be identified by their T-80 chassis combine with a turret without any kind of ERA protection. The T-80B model is the most common early model and is a systems upgrade over the original T-80 and it has some additional armor. Compared to late model T-80's these early models are inferior in protection level, firepower, systems quality and mobility.
T-80: Original T-80 introduced in 1976 and produced for only 2 years until replaced by the T-80B. Original T-80's are powered by the 1.000 hp SG-1000 gas turbine.
T-80B: Most common early model T-80 introduced in 1978. It has a new fire control system, improved stabilization, adds composite ceramic armor and it has the ability to launch the 9M112 Kobra missile. Most are powered by the improved 1.100 hp GTD-1000F engine introduced in 1980.
T-80BK: Commander's version of the T-80B with additional radios and corresponding antennas. The T-80BK lacks the ability to launch the 9M112 Kobra missile and has a reduced ammunition load. 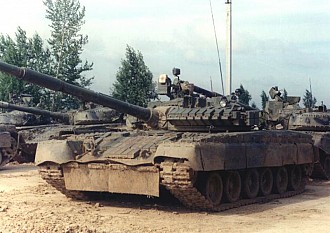 The T-80BV is an improved model of the T-80B that features Kontakt-1 explosive reactive armor over the frontal arc. This highly inreases the protection against HEAT warheads and adds some protection against kinetic energy penetrators. The Kontakt-1 ERA with its myriad of ERA blocks gives the T-80BV models a very distinctive look.
T-80BV: Improved T-80B model that adds Kontakt-1 ERA blocks.
T-80BVK: Command version of the T-80BV with addtional radios.
T-80A: A small number of T-80's was built since 1982 with the new turret of the T-80U, a 1.200 hp GTD-1000M engine and ability to launch 9M119 Svir missile. The majority has Kontakt-1 ERA as used on the T-80BV and this 1984 model is sometimes called the T-80AV.
T-80AK: Command version of the T-80A with addtional radios. The T-80AVK has Kontakt-1ERA. 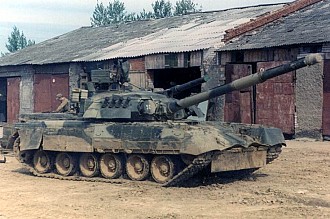 The T-80U is a further development of the T-80A. It retains the new shape turret and ability to launch the 9M119 Svir missile but adds much improved fire control and Kontakt-5 ERA. Together with the T-80BV the T-80U is one of the most common T-80 models. Due to the use of Kontakt-5 ERA the T-80U's turret and glacis are much smoother and look very different from the T-80BV.
T-80U: Since 1992 the more powerful 1.250 hp GTD-1250 engine is used.
T-80UK: Command version of the T-80U with additional radios, Ainet fuzing system for HE shells and Shtora-1 active protection system. Easily recognized by the EO box on each side of the barrel.
T-80UM: Improved T-80U with thermal sight and ability to launch the improved 9M119M Refleks missile. 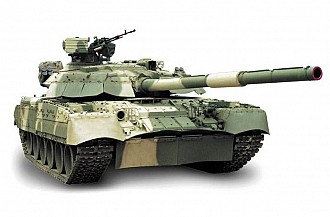 The T-80UD is a variant of the T-80U produced in the Ukraine. It is very similar to the T-80U, although early versions had Kontakt-1 ERA as used on the T-80BV. What sets the T-80UD apart is its use of a diesel engine instead of a gas turbine. This makes the T-80UD cheaper to produce, easier to maintain, more reliable and gives it more range. The downside is that the good mobility is somewhat reduced.
T-80UD: The T-80UD is a T-80U equiped with a diesel engine. Production that took place after the collapse of the USSR relied on locally produced components such as the KBA-3 gun and a welded turret.

The T-80 was to be a more capable main battle tank to be used alongside the cheaper T-72 series.

The production of the T-80 was ceased in favor of the less expensive T-90 series.

The 12.7mm NSVT heavy machine gun is mounted on the turret roof.

The 7.62mm PKT machine gun is mounted as a coaxial weapon alongside the 125mm cannon.