The T-90 is a modern main battle tank of Russian origin. It was developed in the early 1990's as a new generation main battle tank to supplement and eventually replace the T-72 and T-80 in Russian service. The T-90 is a much improved version of the T-72 and was called T-72BU when it was first designed. The main reason for the T-90 to be developed was that the T-72 design is much cheaper than the more capable T-80. Since the T-90 uses both components developed for late model T-80's and new technologies it has a slightly better performance than late model T-80's at much lower production costs.

The T-90 is based on the T-72 but has been significantly improved improved in firepower, protection, mobility and systems. The layout remains similar with the driver in the front, the two man turret in the middle and the engine and drivetrain at the rear. The T-90 uses the 125mm 2A46M cannon and has the capability to launch guided missiles. The armor has been improved and Kontakt-5 ERA is used, giving the T-90 a distinctly different look than the T-72. Compared to the T-72 and T-80 the T-90 uses newer components such as fire control, stabilization, optics and sensors.

The main armament is the 125mm smoothbore 2A46M4 cannon that fires a wide variety of ammunition, including the latest Russian APFSDS, HEAT and HE-Frag rounds. The cannon is connected to an automatic loader which holds 22 rounds and achieves a maximum rate of fire of 7 rounds per minute. Combined with a modern fire control, laser range finder, wind sensors and stabilization system the chance to hit is good, even when on the move. The presence of the Ainet fuzing system allows HE-Frag rounds to airburst. A 7.62mm PKT machine gun is fitted as a coaxial weapon and a 12.7mm NSVT or Kord heavy machine gun is present on the turret roof.

The T-90 uses steel armor with composite layers over the frontal arc. The turret, glacis plate and hull sides are also covered in Kontakt-5 ERA which increases the protection level against HEAT warhead significantly. Tests indicated that the T-90's protection level was better than the T-72BM and T-80U. Additionally every T-90 is fitted with the Shtora-1 countermeasure system. An NBC system and smoke grenade launchers are present as well.

The T-90 has a good mobility on roads and in the field. The tracked chassis allows is to travel over nearly any type of terrain. Most T-90's are fitted with an 840 hp diesel engine, but late production models use a newer 1.000 hp diesel engine. The maximum speed on roads is 65 km/h and about 40 km/h in the field. When using a snorkel the T-90 may ford through water with a maximum depth of 5 meters.

The T-90 remains in limited rate production for the Russian forces. The T-90 supplements the T-72 and T-80 currently in service and may eventually replace them. India is the main export user with over 600 in service and a total of 1.600 planned by the year 2020. The T-90 has been acquired by several other nations as well and sales are expected to continue in the future. 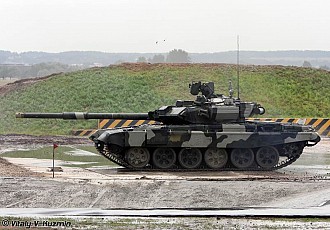 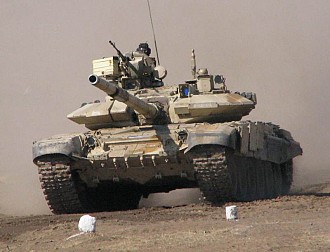 The T-90A is an improved version of the T-90. It has a welded turret instead of a cast one, a thermal night vision system and the 1.000 hp V-92S2 engine. The T-90S is an export version that has the original 840 hp engine, is fitted with reduced capability systems and some lack the Shtora-1 countermeasure system.
Versions:
T-90A: Improved T-90 with new turret, improved engine and thermal night vision.
T-90AK: Command version of the T-90A with additional radio equipment.
T-90S: Export version of T-90A with reduced capability systems.
T-90SK: Command version of the T-90S export model. Fitted with additional radio equipment. 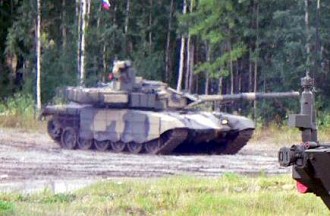 The T-90M is the latest development of the T-90. It was first developed in the late 1990's and is not yet in production. The all welded turret has a different shape than the one used on the T-90A and instead of Kontakt-5 ERA the newer Relikt is used. The new ERA package gives the T-90M a distincly new look, partly due to the much larger side skirts. The improved 1.000hp V-92S2 engine is also used.

The 12.7mm NSVT heavy machine gun is fitted on the turret roof.

The 7.62mm PKT machine gun is fitted as a coaxial weapon.