The 9K330 Tor is a late Cold War era self-propelled SAM system of Soviet origin. It was developed from 1975 to 1985 by Antei as a replacement for the older 9K33 Osa (SA-8 Gecko). The Tor is also well known under its NATO reporting name SA-15 Gauntlet. Since its introduction it is regarded the most capable short range self-propelled SAM system and continuous upgrades The Tor is one of the few short range SAM systems with a high effectiveness against cruise missiles and precision guided munitions.

The Tor is based on a tracked chassis that protects the crew from small arms fire. The three crew members are seated in the front, an unmanned turret is installed in the middle and the engine and drivetrain are located at the rear. Two boxes with four missiles are installed vertically in the middle of the turret and extend into the hull of the vehicle. The tracking radar is installed at the front of the turret and the optical system is fitted next to it. The search radar is fitted at the rear and is lowered behind the turret when not in use. The search radar rotates when in use and can be used on the move. The medium sized missiles use radio command guidance and are fitted with folding fins. Upon launch the vehicle comes to a halt, the missile is propelled upwards by a gas charge, is rotated in the correct direction and then the rocket ignites.

The Tor system fires the 9M330 missile that was designed specifically for this system. Besides aircraft and helicopters the Tor may also engage precision guided munitions, cruise missiles and UAVs. The maximum altitude is 6 km and the maximum range is 12 to 15 km depending on missile type. The original Tor system could only engage a single target at a time. The improve Tor-M and M1 may engage two targets simultaneously. The latest Tor-M2 is able to engage 4 targets at a time. Targets may fly up to Mach 2 and maneuver at 12 G.

The primary means of engaging targets is by radar guidance. Each Tor system is fitted with a 25 km 360 degree search radar and 15 km 60 degree tracking radar. The Tor has a good ECM resistance but can also engage targets by TV tracking. The TV tracking system has a maximum range of 20 km and is fitted with a laser range finder. The naval version uses a similar two radar setup but has a more powerful search radar.

Most Tor systems are based on the GM-355 tracked chassis that allows it to keep up with tanks and other armored vehicles through any terrain. A towed version is available which has the advantage of reduced costs. The latest systems are also available on a large MZKT-6922 6x6 truck chassis that is cheaper, offers more internal space, has even better mobility and still provides protection to the crew. None of the Tor systems are amphibious.

The main user of the Tor is Russia, which has various versions in service. It also has been exported to various nations in Asia, the Middle East, Europe and South America. 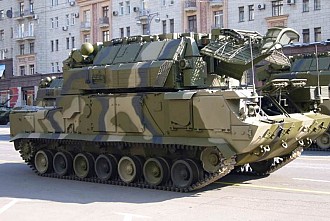 The original 9K330 Tor was fielded in the late 1980's and has the NATO designation SA-15A. It is based on the GM-355 tracked chassis and fires the 9M330 missile. Since 1991 and improved version entered service. The 9K331M Tor-M is known as the SA-15B and the 9K331M1 Tor-M1 is known as the SA-15C. At first it was thought that the Tor-M1 was a further improved version of the Tor-M, but it is now known that the Tor-M1 only has an improved chassis. The Tor-M uses the improved GM-355M chassis while the Tor-M1 uses the GM-5955 chassis, which is longer and has 7 roadwheels instead of 6.

The Tor-M1T is a trailer mounted version of the Tor. It has a much lower cost than the tracked variant and was developed for export. The trailer is fitted with the same unmanned turret as used in the tracked version. The command center may be fitted on a separate trailer or on the truck that tows the launch trailer. The Tor-M2 is also available in a towed variant, called Tor-M2T. Considering the Tor-M2 is available on an armored wheeled 6x6 chassis the cost benefit of the trailer mounted version is lost. The advantage that remains is that the command center is positioned away from the launcher and radar systems. When an anti-radiation missile strikes it would not take out the crew. 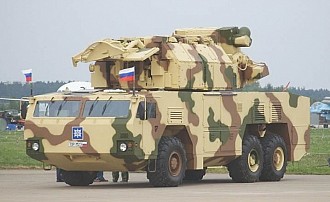 The Tor-M2 is a much improved version of the Tor-M1 that is available since 2009. The Tor-M2 is known as the 9K332 system and its NATO designation is SA-15D. The export version is known as Tor-M2E. The M2 uses a new type of missile and has improved tracking and fire control radars. The Tor-M2 can engage 4 targets simultaneously, which is twice as much as the Tor-M1. The Tor-M2 is available on a tracked and a wheeled chassis. The tracked chassis is similar to the GM-5955 and has 7 roadwheels. The 9A331MK uses the MZKT-6922 6x6 truck as chassis, which was developed specifically for this role. Just like the tracked chassis the 6x6 truck chassis provides good mobility and protects the crew from small arms fire. 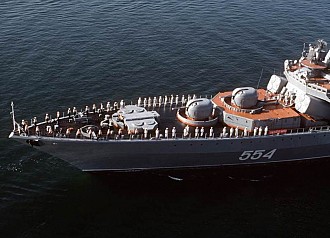 The naval version of the Tor system was developed concurrently with the land based version. It is known in Russia as the 3K95 or ZS-95 system and it has the NATO reporting name SA-N-9 Gauntlet. The system uses a variable number of 3S95 8 round revolving drum vertical launchers. Fire control is provided by the 3R95 Podkat radar system which has the NATO designation Cross Swords. The 3R95 consists of a 45 km surveillance radar and a 15 km fire control radar. The response time is 8 to 24 seconds and up to 8 missiles may be fired simultaneously at up to 4 targets.

9M330: Original Tor missile that is used with the original Tor systems. It is believed that it can also be launched from the Tor-M and Tor-M1 systems.
9M330-2: Naval version of the original 9M330 missile. It has a similar engagement envelope as the 9M330 but is improved with guidance similar to the longer range 9M331, allowing two missiles to be launched simultaneously per target.
9M331: Improved version of the 9M330 with improved range and the ability of two missile to be launched at a single target.
9M332: The 9M332 is the latest version of the Tor missile which is used by the Tor-M2 systems.

The 9K33 Osa in an older Soviet point defense SAM system which is being supplemented by the newer 9K330 Tor.