The Derby is a modern Israeli air to air missile. It is a further development of the successful Python series. It features active radar homing and beyond visual range capability. The Derby is more in the league of the French MICA RF than the US AMRAAM or Russian R-77.

The Derby can be considered an enlarged version of the Python 4 missile using active radar homing instead of infrared guidance. As such the Derby is a medium sized missile. The layout is conventional with the guidance section in front, followed by the warhead and with the rocket motor making up the rear half of the missile. There are four steerable fins at the front and four small steerable wings at the rear.

The Derby uses active radar homing and can be launched at targets at short range and beyond visual range. At longer ranges the missile uses inertial navigation before the missile's own radar acquires the target. Seeker and ECCM quality are reportedly very good.

The Derby is used on the Israeli F-16I. It can also be integrated with other types of F-16, the F-5 Tiger and the French Mirage. Reportedly it is to be used on the Indian Tejas as well. Additionally the Derby can also be used as a surface to air missile. The truck mounted SPYDER system is able to launch both the Derby and the infrared guided Python 5.

The main user of the Derby is Israel where it is used alongside the infrared guided Python series and radar homing AMRAAM. Additional sales have been to Georgia and India. 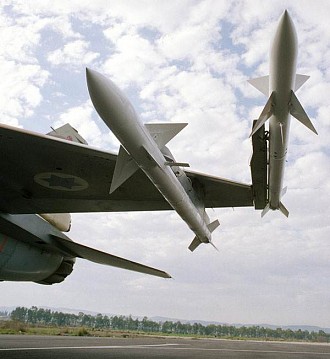 The Derby is produced in only one variant. This model is both capable to launched from aircraft or from the ground based SPYDER system, making the missile truly multipurpose. The Derby can be identified by its pointed radome which is very different from the round infrared seekers used on the Python series. Additionally it has only a single set of forward fins. Compared to other radar guided missiles, such as AMRAAM and Sparrow, the forward fins are located much closer to the nose.