The Kh-15 is a supersonic strategic air to ground missile of Soviet origin. It was developed in the late Cold War era as the Soviet counterpart to the American AGM-69 SRAM. In the West it is known under NATO reporting name AS-16 Kickback. The Kh-15 is a capable missile that is difficult to intercept.

The Kh-15 originated from a protracted design effort that can be tracked back to the late 1960's. The Kh-15 is a large, sleek cylindrical missile with three small fins near the nozzle. To withstand the high airspeed the body is made of titanium alloy. The guideance section and warhead are located in the pointed nose section. The rest of the missile is made up by the solid fuel rocket motor. The original nuclear tipped Kh-15 uses a parabolic high altitude flight path in order to plunge down at high speed on its target. It is unclear whether the anti-radiation and anti-shipping variants use the same parabolic flight path.

The Kh-15 is fitted with a 350 kT nuclear warhead. The warhead on the conventional variants reportly weighs 150 kg. With its parabolic flight path the Kh-15 reachs speeds of up to Mach 5, making it the fastest air to ground missile in service. The maximum range is 280 km, but is highly dependent on launch parameters such as altitude and airspeed. Although the flight path is predictable the timeframe and missile speed make it difficult to intercept. The conventional variants are believed to use a straighter flight path with corresponding shorter range of 150 km and lower terminal speed.

The Kh-15 can be fitted to three types of Soviet bomber aircraft. It is mainly used on the supersonic Tu-22M3 (Backfire-C) strategic and maritime strike bomber. It is able to carry 6 missiles in the MKU-6-1 rotary launcher in its bomb bay. Additionally 4 missiles can be carried on underwing pylons. The Tu-95MS-6 (Bear-H) can carry 6 missiles. The Tu-160 (Blackjack) strategic bomber can carry two MKU-6-1 rotary launchers internally for up to 12 missiles. 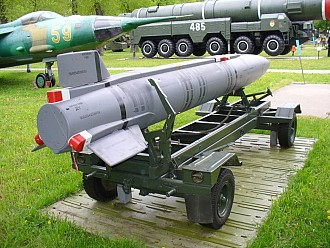 The Kh-15 is often considered the Soviet counterpart of the American AGM-69 SRAM. They fulfill a similar role.