The Type 65 torpedoes are very large Cold War era torpedoes of Soviet origin. Due to their size the use of these weapon was limited to only a very few types of submarines. The Type 65 is one of the most capable anti-ship torpedoes in existence as it has a very high speed, a very long range and a very powerful payload. The Type 65 is also a very dangerous weapon system that needs to be handled with care due to its hydrogen peroxide fuel. A Type 65 torpedo has been blamed for the explosion that sunk the Russian Kursk nuclear powered missile submarine.

The Type 65 may have started out as an upscaled Type 53-65K torpedo. The Type 65 has a diameter of 650mm. The seeker is in the nose with the warhead directly behind it. The fuel and turbine engine make up most of the center. Unusually the guidance section is in the rear. The two contrarotating propellers are encased by control planes.

The anti-ship versions use acoustic wake homing. Inertial navigation by means of gyroscopes is used to guide the weapon to a position where the wake can be picked up. The nuclear variant uses inertial navigation towards a predefined detonation area.

The conventional Type 65 torpedoes carry a warhead of at least 450 kg, making it powerful enough to sink an aircraft carrier with only one torpedo. The warhead has both impact and proximity fuses. The nuclear variant may carry a more powerful warhead than the 20 kT range that is used in nuclear tipped 533mm torpedoes as more space and payload available.

Type 65 torpedoes are solely used on Russian submarines. Most SSN and SSBN designs since 1972 feature 650mm torpedo tubes, next to 533mm torpedo tubes. Use on surface ships and coastal defense launchers has been proposed for the export models.

The Type 65 torpedo is only used by Russia, although it has been offered for export. The accident with the Kursk led all Type 65's to be stored. There are reports that China adopted Type 65 technology, but 650mm torpedoes are currently not in use with the Chinese navy.

The first 650mm to enter service in 1973 was the non-homing 65-73 torpedo carrying a nuclear payload. The 65-73 follows a pre-entered course and detonates at a set point. The use of the 65-73 torpedo would be to target carrier battle groups, missile submarines and coastal targets.

The 65-76 torpedo is a conventional wake homing torpedo that entered service in 1976. It is based on the nuclear tipped 65-73 torpedo, but replaces the nuclear payload with a wake homing device and conventional explosives. The 65-76 carries more payload than other conventional torpedoes, but is mainly a more potent weapon due to its range and speed. It is also known under the nickname Kit, Russian for whale.

The DT is an improved version of the Type 65-73 and is offered for export. The DST-92 features a larger and improved warhead. Both DT and DST-92 are offered for export but may also be in use with the Russian navy in small numbers. 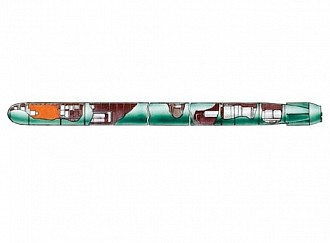 The TT-5 is an export model that was developed as a private venture. It is a much safer torpedo as the compressed liquid fuel has been replaced by solid propellant. The original twin screw setup has been replaced by a propulsor system. Besides being launched from submarines it is also proposed that the TT-5 can be fired from surface ships and coastal defense launchers. The five different 9P135 models are rather similar in size, weight and performance. The latest 9P135M3 has a thermal imaging sight.